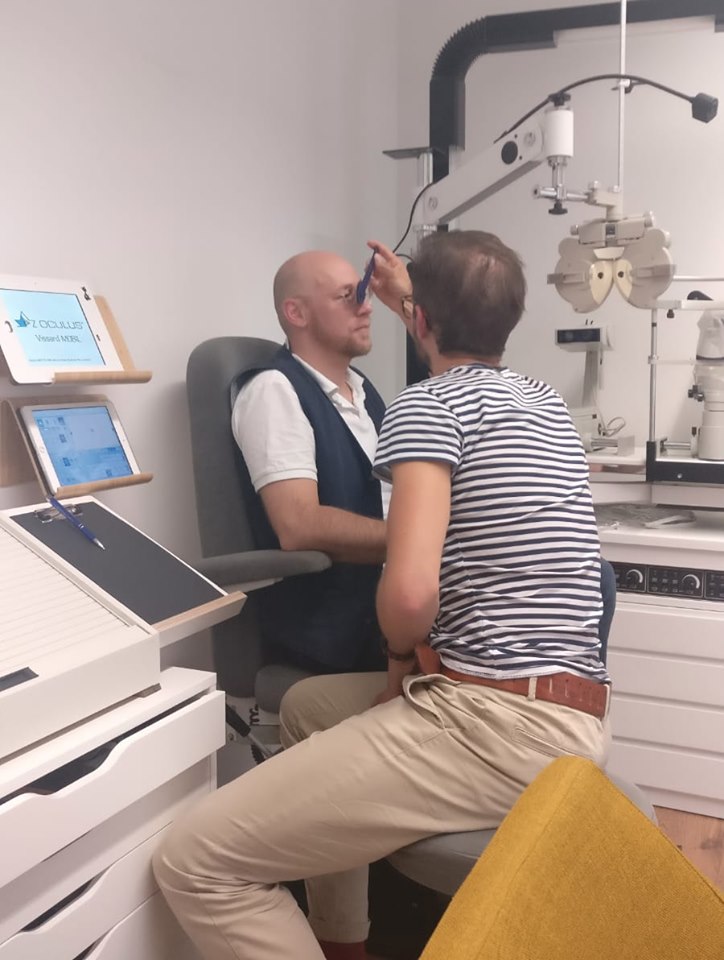 Hello there,
Lukas here. I am a new member of eyeskills and today I decided to put out my first facebook post!
Ben and I had the great chance to meet Marco Schätzing in his natural habitat. He is a studied optometrist and works as a visual trainer. Today, Marco showed us the “Maddox Test” again. The “Maddox Test” is a procedure which is used to actually measure strabismus for near and distance. The “Maddox Rod”, which is actually a red parallel plano convex cylinder lens, is placed in front of one eye, whilst the other one looks at a numbered horizontal axis, with the zero in its center. A light shines from the direction of the centre, to be broken in the “Maddox Rod”, so Ben could only see a vertical ray of red light, with the eye behind the rod. So Ben could see, where on the axis he was seeing the ray from the one eye, in relation to where the other eye was looking. If he had seen it realy closely to the center, it would have been what you would expect from a person without strabism. At a 6m distance, the misalignment was only 1.8 degrees, which is not crazy, whilst up close (40cm) the divergence was 8 degrees.

This was an interesting insight of how misalignment can vary with the distance of the fixing object. We were interested in that because we think we can recreate a test like this in the app – but in a more interesting way.

But this is not all we learned within our time with Marco:

We discussed the recent version of the app, which Marco could lay his eyes on today. It led to an interesting discussion about a lot of different shapes and forms of strabism. We ended up discussing more about the plight of people, who have acquired their strabism through a stroke. We know that this is a huge phenomenon we should consider way more in our work.
And we will!