Here I am in Berlin, with the Prototype team and a poster. Interesting discussions have been had, but most interesting for me, has been the interest in the project from conference participants who have noticed the strabismic eyes and come over to try it out.

As usual, each person displays subtle but significant differences in the way they perceive the world. 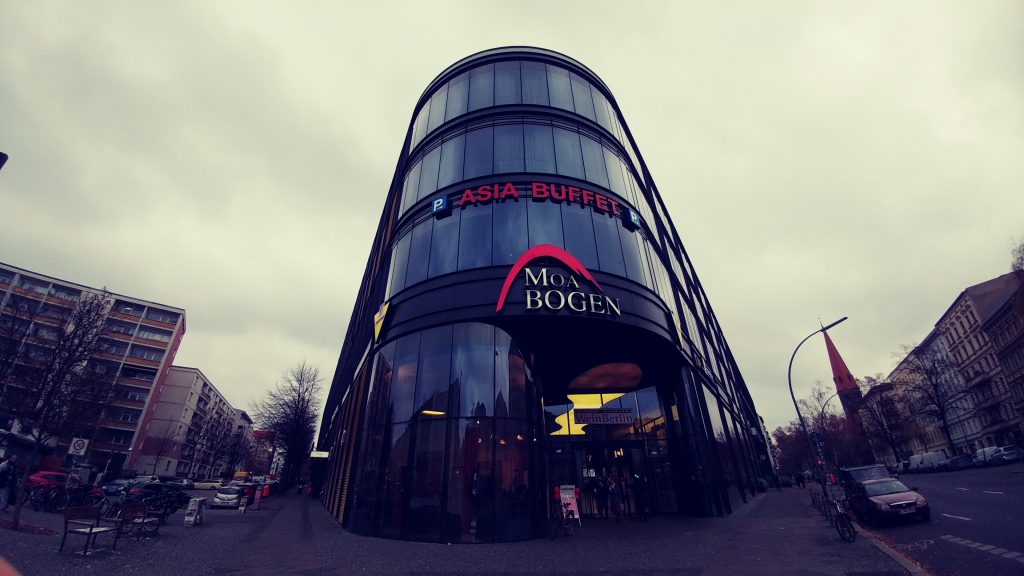 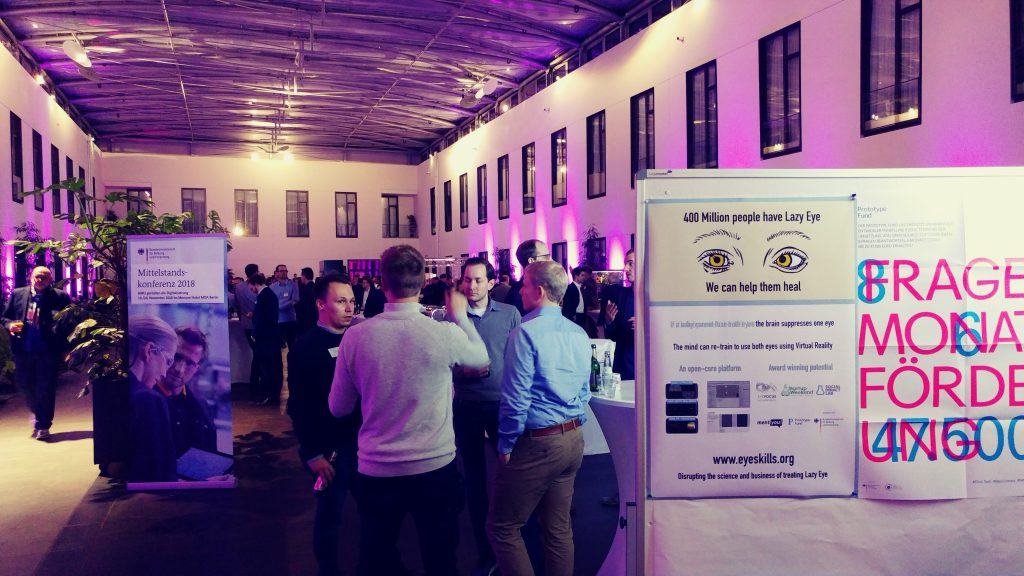 The first young lady, Steffi, told me she had strabismus.  I was confused, as her eyes were perfectly straight – behind her glasses. I commented that I couldn’t see any misalignment, and as she took her glasses off, she immediately expressed a right sided esotropia.

In her case, she has a 6+ dioptrine hyperopia (long-sightedness). As a child she was treated with training glasses and a semi-transparant patch on the strabismic eye.  The patching didn’t solve the problem, but she has had the good fortune that this combination of treatment provided an environment in which she managed to recover binocular vision under certain circumstances.

Interestingly, once I pointed out that, on removing her glasses she was instantly strabismic, she couldn’t repeat the phenomenon.  This is something we have seen a few times.  When a participant becomes self-concious, or hyper focused on their eyes, their natural responses change.  The importance of consciousness!

We discussed this a little, and Steffi mentioned that during the stress of her PhD her visual accuity in the strabismic eye dropped to 80% from its usual near 100% accuity. She also mentioned that “Eye Yoga” exercises make a significant difference to how comfortable her eyes, and seeing, feels.

However, when trying EyeSkills, all did not go as I anticipated. We tested without glasses. In the binocular suppression environment, Steffi did not experience suppression, despite the sets of arrows being placed in conflict.  This is unusual – the first time it has happened for us.  She reported it making her feeling sick and disoriented, which is quite a strong reaction, but she was able to see both sets of arrows simultaneously.

We moved on to the misalignment measurement environment. Unfortunately, I overwrote the measurement, but it memory serves me there was a 14degree misalignement.

In the depth perception experiment, Steffi managed 8/10 correctly. This was particularly interesting as she mentioned that her Orthoptistin’s new 3D measurement devices (tablet based)  do not work for her.  They can only assess her depth perception using traditional physical tests.  This does not particularly surprise me.  Having seen the new tablet based rig of our own vision therapist, it seems to me that the depth effects they are trying to measure at a distance to the observer of 6m are ridiculously small.  The most extreme offset between the two copies of the object to have apparant depth starts extremely small, and quickly goes sub-pixel. EyeSkills starts with more pronounced distances – we want to measure if there is any depth perception, not if it is perfect and then mistakenly claim there is no depth perception because we have over ambitious measurement goals!

We then proceeded to the “virtually real realignment”.  Steffi reported that the experience was challenging her brain, it felt like new glasses, but she was fusing.  As I initiated the eye straightening, she (as is normally the case) did not report experiencing anything.  She was perceiving no change, and holding fusion, although eventually the two images being fed from the outside world were perfectly straight.  We then tried the same thing with the video straightening, which also worked as hoped.

In Steffi’s case we manged to get to straight eyes, fusing, with depth perception, and without glasses… but I do not see how relevant the system might be for her in everyday life given that she has stereo vision as long as she uses glasses.

Adrian was esophoric in his left eye. He had also been patched as a child.

The binocular suppression environment immediately showed that Adrian was amblyopic. He could successfully find a position ( 46% luminance reduction in the non-strabismic eye) where he could break suppression.

The misalignment was measured at 17 degrees. Adrian consistently thought that the right most circle in the depth perception scene was the closest, but this was only true in every second example, leading to 5/10 being correct.

Adrian was also able to use the eye-straightening scene, but was losing fusion with around 2 degrees left to go until the straightened position.  This might make Adrian a perfect candidate for experimenting with the eye straightening experience.

VRG is a very interesting VR firm from Prague.  I got a chance to try out their 150degree high resolution VR headset, which has IR emitters and cameras hidden behind the lenses (at the moment, for auto calibrating pupillary distance). Neat design.  They also consider commercial eye tracking solutions to be completely over priced, and are looking into having their own low cost solution ready in the next months.  I will be talking to their CEO (Marek) to explore some of the ideas I have for keeping costs down, and perhaps testing their kit 🙂 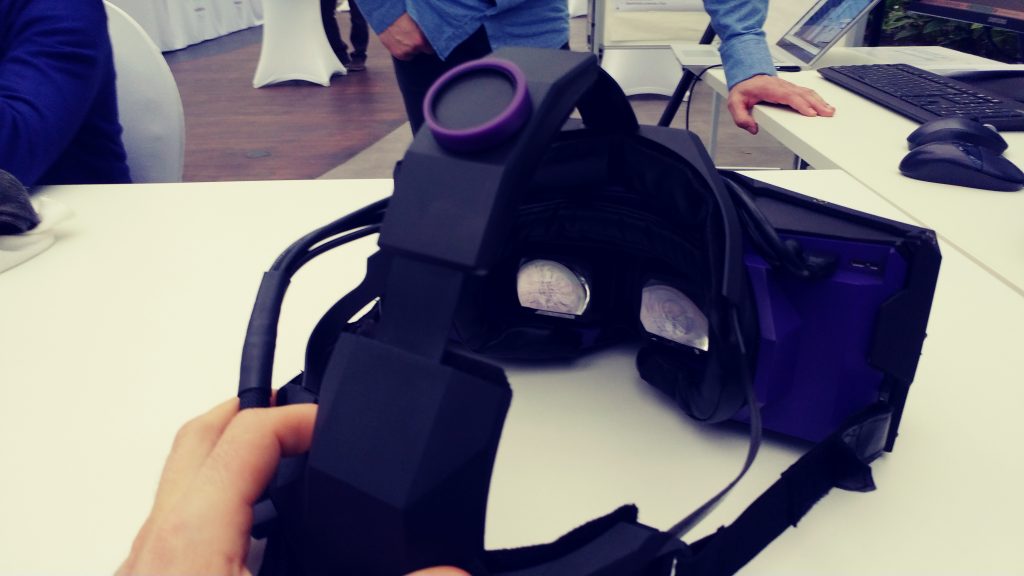